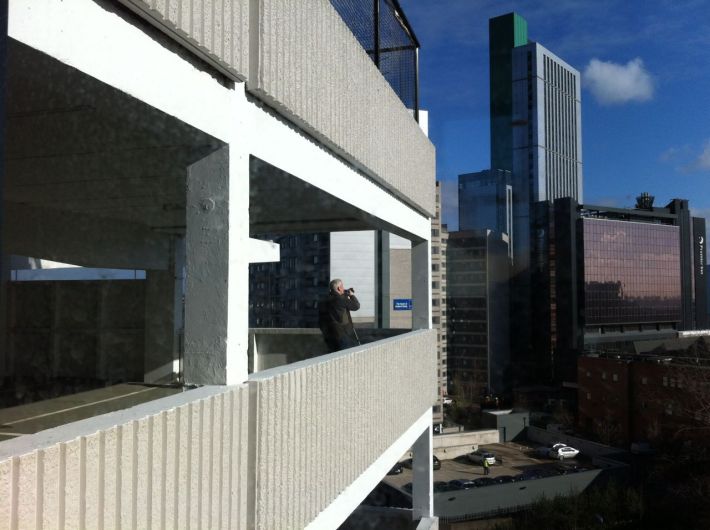 This week I had the privilege of assisting the supremely talented photographer Richard Moran (pictured in action above) for a couple of days, on a shoot in and around Leeds city centre. One of Richard’s objectives was to present Leeds and its inhabitants in a way that it and they had not been seen before, which is no mean feat – finding an original angle from which to photograph anything is difficult enough, but a city that’s been there for decades and has been photographed many times before… there lies a challenge!

Over the course of the two days I learned many things from Richard and, in the process, about Leeds also. Seven floors up above the new Trinity building it struck me how diverse Leeds is architecturally, highlighted by the Trinity building’s modern glass dome situated next to the grade one listed Holy Trinity Church steeple that Richard framed together to great effect to create an interesting and engaging juxtaposition. Pockets of Paris down here, Vienna down there, modern apartments to the left and 1960’s concrete hell to the right, Bridgewater Place within walking distance of famous, long standing, Leeds landmarks such as The Corn Exchange (150 years old this year), The Queens Hotel on one side and The Travelodge on the other… Endless variety not immediately apparent at ground level.

The shoot at the Northern Ballet was a window into another world. Watching the warm up and following dance class it struck me how physically demanding ballet is beneath the grace and poise with which it is performed. I swear some of those dancers have rockets beneath their feet. How else could they achieve such elevation? Much like the dancers, Richard also put his body through enormous physical exertion searching for interesting angles from which to shoot the action, at one point lying flat on one side shooting upwards from the hardwood floor of the dance studio, and he even managed to get back up unassisted too. Bravo!

Other things that I have picked up in the last few days include discovering ‘Primos’, the best gourmet hotdog restaurant in the world, finding out where The Flash Centre is, that sometimes mightily impressive things are contained within innocuous looking buildings and that, in photography, ‘traveling light’ is a relative term. Good job some of my ancestors were evolved from alpacas… probably.